First, an explanation of the word "chimera".

The Chimera was a mythical creature with different heads that travelers in the wilderness feared. Long after the Chimeras of antiquity were forgotten, chimerical figures appear as embodiments of the deceptive, even satanic forces of raw nature. For example, Dante's vision of the Geryon his Inferno represented hypocrisy and fraud for ministers schooled in the classics.

For that reason, theologians could refer to any non-Biblical solution to the problems of man as a chimera. Instead of trusting the Bible explanation for the sin of man and how man can stop sinning, the Chimera offers a tantalizing pot at the end of the proverbial psychological rainbow. 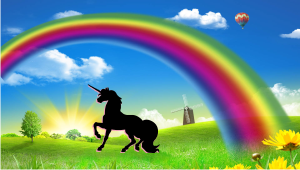 After 300 years of theologians persuing the pot at the end of the Chimera of psychology rainbow, man is worse off than ever. Ministers in virtually every denomination (including Pentecostal ministers) have abandoned nouthetic couselling for psychological counselling with the assistence of drugs. 50 years ago. ministers were known for getting addicts off of drugs. Today, ministers are more likely to put sinners on mood-altering drugs. Satan has used psychology as the number one explanation for the condition of man, while God has never changed His view.

Psychology, since the Enlightenment, was the Chimera of liberal ministers who wanted to do away with supernatural explanations of regeneration, the sinner-to-saint change of nature and the necessity of the indwelling of the Holy Spirit.

A writer in the August 1821 Evangelical And Literary Magazine wrote, “Doctor (John) Witherspoon , in an address to his class at the close of his lectures, observed that in mental philosophy there were difficulties which the present state human knowledge did not enable us to solve; but he had no doubt the time would arrive, and perhaps at no distant day, when these difficulties would be removed, and we enjoy as much certainty and perspicuity (understanding) in moral as in natural philosophy.”

Modern translation: “In understanding what causes man to sin and then stop sinning, these are difficulties which the present state human knowledge does not enable us to solve; but I have no doubt the time will come, and perhaps soon, when these difficulties would be removed, and we will have as much certainty and understanding of what causes man to sin and stop sinning as we have of how physical things work..”

“Mr. Graham immediately, as he expressed it – felt his heart burn within him. Oh- said he to himself – that I might live to see the day!”