How John Blair Smith
Relates to the
Heresy of Decisional Regeneration 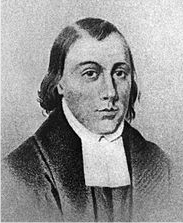 John Blair Smith (1756-1799) was a Presbyterian President of Hampden Sidney College of Virginia during the great revival of 1788. When Cary Allen (1767-1789) came back to school as a convert, Smith “was exceedingly fearful it was all a delusion, and put him through the most rigid examinations, set him to reading Bellamy’s True Religion Delineated and distinguished from all counterfeits.” Smith, a Bellamite,  was fortunately regenerated early in life, so he was not debilitated by the Scottish Common Sense Realism of Witherspoon when he attended the College of New Jersey (Princeton) before the Revolutionary War.

Sketches of Virginia reveals how Scottish Common Sense Realism gained a hold in America.  There is an interesting comparison between two rival students of John Witherspoon at the College of new Jersey (Princeton) who became Presidents of rival colleges. In the Virginia revival of 1788, John Blair Smith, a Bellamite, seamlessly worked with the Holy Spirit. William Graham, a Scottish Common Sense Realist, worked on the fringes of the revival, always looking for psychological explanations for religious affections.

Allen’s conversion was the first of many, as students came under the influence of the Holy Spirit.  Smith was able to able to co-labor with the Holy Spirit in that revival, “He advised those who were awakened not to be too hasty in professing conversion; and urged them to examine the foundations of their hopes well before they entertained a hope they had made their peace with God, stating it was a dreadful thing to be deceived in a matter of such importance. Generally months, and in some instances a year or more was suffered to pass before they were received into a church. No anxious seat, nor inquiry meetings were used or thought of in those days: but no opportunity was suffered to pass by without talking to such persons in the most plain and faithful manner”.

Smith is perhaps remembered by historians most for his spirited fight with Patrick Henry over whether the state of Virginia should support all Christian denominations with taxpayer money. Henry was for support, Smith was against. Smith’s argument for separation of church and state won the day.

William Graham (1746-1799) was a classmate of Smith at the College of New Jersey (Princeton) and later President of Washington College. Unfortunately, converted as an adult, he wholeheartedly adopted John Witherspoon’s Scottish Common Sense Realism. He taught students to see religious affections as emperical workings of the mind.

“The science, however, which engaged his attention more than others, except theology, was the philosophy of the mind…the system of mental philosophy which he formed, was in cleverness and fullness superior to anything which had been given to the public…and it is greatly to be regretted that his lectures were never fully committed to writing”.

It was this system that Graham passed onto students, especially Archibald Alexander.

A writer in the August 1821 Evangelical And Literary Magazine wrote, “Doctor (John) Witherspoon , in an address to his class at the close of his lectures, observed that in mental philosophy there were difficulties which the present state human knowledge did not enable us to solve; but he had no doubt the time would arrive, and perhaps at no distant day, when these difficulties would be removed, and we enjoy as much certainty and perspicuity (understanding) in moral as in natural philosophy.”

Modern translation: “In understanding what causes man to sin and then stop sinning, these are difficulties which the present state human knowledge does not enable us to solve; but I have no doubt the time will come, and perhaps soon, when these difficulties would be removed, and we will have as much certainty and understanding of what causes man to sin and stop sinning as we have of how physical things work..”

This faith in psychology Witherspoon passed onto William Graham, who passed it onto Archibald Alexander. The article continued…

“Mr. Graham immediately, as he expressed it – felt his heart burn within him. Oh- said he to himself – that I might live to see the day!”